I am back at home. Unfortunately. I know it is always hard to go back home, to return to reality from a great holiday. This time around it was even more difficult for me. END_OF_DOCUMENT_TOKEN_TO_BE_REPLACED

I arrived on Koh Chang with sunset. The perfect welcome to my last stop on this trip. This was meant to be the relaxing part, let’s see if it works out as planned…

Koh Chang is an island on Thailand’s East coast. It is part of the maritime nature reserve, which makes it a great spot for wildlife watching, snorkelling, diving and enjoying emerald blue waters. You can reach the island by ferry only, there is an airport nearby on the mainland (Trat), but I chose to book a private transfer from Bangkok, which may have worked out cheaper and doesn’t really take up any more time than flying (considering check-in/out times etc.). If you are considering the taxi transfer option, I can only highly recommend to book with Ian from ‘I am Koh Chang’, who provides an excellent service and will help you with any Koh Chang related question.

I stayed at Kai Bae beach, which is a quieter part of the East side of the island, but still offers plenty of options to go out for dinner or drinks and do a bit of shopping. I discovered the Funky Monkey Cafe, which was a great find. A modern and quirky bar/ cafe, offering delicious homemade ice creams, yummy cocktails and playing great tunes – all for decent prices. The owner puts a lot of love and thought into the decoration, it is well worth a few Instagram posts ;-). 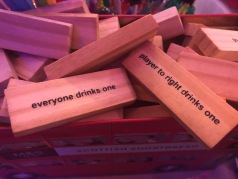 New Years Eve. One word: random. That day I was rather emotional (of course, it’s me we are talking about. Sigh.). I really wanted to be around people, around people who know me and love me. I struggled a lot and took to Twitter, who managed to calm me down a bit. I tried to call my friend, but the connection was really poor and we only ended up sending voice messages, which made me cry. The hotel arranged a (compulsory) Gala Dinner, which included a big buffet, some cultural performances and a fire show. The awkward part of it was, that tables were assigned as per hotel booking, meaning I again sat at a table on my own. And I had the table closest to the stage, so everyone could have a good look at me sitting there by myself. Cringe. At the end of the meal I spotted another lady on her own and invited her to join me – Brook from Seattle, who teaches Communication at college (isn’t it fabulous that this a subject on the curriculum!?). And from that point the evening turned out to be so much more fun. The hotel next door had a fabulous band playing, so we snug over there, managed to get free champagne, watched a fire performance at the beach, saw their fireworks and thoroughly enjoyed ourselves.

So did I manage to relax? At the end of my first day sun lounging at the beach I got itchy feet and booked a full day snorkelling trip with Kai Bae Hut Jet Boats – covering 5 islands within the nature reserve. I also booked a full day mountain hiking tour. The snorkelling trip was good, even though I had hoped for a smaller group. Brook joined me on this trip, it felt good to have a partner in crime. We went by jet boat, they squeezed about 35 people on that boat which was a little disappointing as the trip was advertised as a ‘small group tour’. But hey ho – the snorkelling was great. We saw so many fish, in all colours of the rainbow – absolutely amazing! If you would float still in the water the fish would come up close, only inches away from your goggles and look at you. I giggled so many times, well as much as possible under water anyway. Some of the corals were still alive and shimmering in purple, blue and yellow shades, I can only imagine what a fully alive reef would look like – a true underwater Disney world paradise. Shame I didn’t bring my underwater camera. Unfortunately most of the corals we saw were dead though, which is a very real reminder of what we do to our environment. 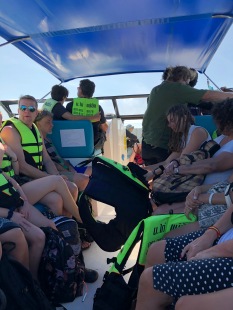 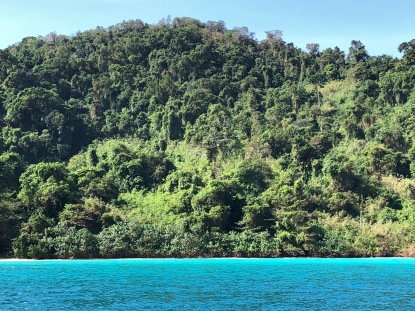 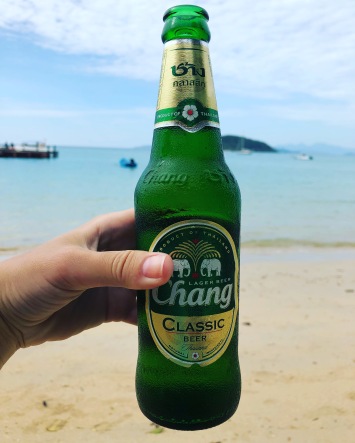 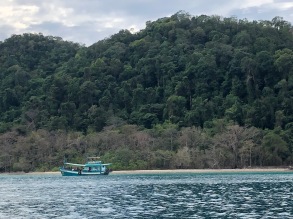 At the end of the boat trip another lady mentioned that she was interested in joining my hiking tour, so here I had another companion – it worked out rather beautifully.

The hiking tour, however, was an experience of a different kind. I am not sure if I should say it was awful. It certainly was not what I expected. About 60% of the time I was worried for my safety. I was aware that hiking in the jungle would not include well marked trails etc. What I didn’t expect though was the complete lack of instructions (recommended clothing, footwear, other equipment) and outline of what we would actually do (walking – of course, climbing mountains – of course, partly canyoning, abseiling, …). We were a small group of 5 people and walked from the West coast to the East coast of the island, in total 10km as the crow flies, climbing 4 mountains along the way, each with an elevation of up to 500m, passing waterfalls and crossing a river about 10 times. Luckily I wore hiking boots, long trousers and a long sleeve shirt, despite the heat, as we had to fight our way through the bush. One stretch we even had to rob on hands and knees as the vegetation was so thick we couldn’t get through any other way. Half of the day we followed a riverbed, which included abseiling between 10-20 metres on flimsy ropes that were tied to trees – a couple of people in the group were really scared, and by that time all of us were a bit fed up with what turned out to be a rather worrying trek. Our guide, however, couldn’t be more blasé – all was ‘easy, don’t worry’. Despite insect repellent I discovered that a leech had attached itself to my ankle. I flicked it off and within 5mins my sock was soaked in blood, and the bleeding wouldn’t stop. I mentioned it to the guide and he just said ‘oh well, that happens quite often’. After 1.5hrs and two soaked tissues I insisted of him looking at it (no, it still hadn’t stopped) – he took out a cigarette and but a lump of tobacco on the wound. After about 15min it eventually stopped bleeding, leaving me relieved but a bit uneasy – is it possible to get an infection from a leech bite? I was too scared to google it, as I would probably have read I would lose my foot or so… 😉 So, would I recommend this trip. No, certainly not. If you want to do it nevertheless, please be prepared, bring plenty of water, snacks and expect the unexpected. 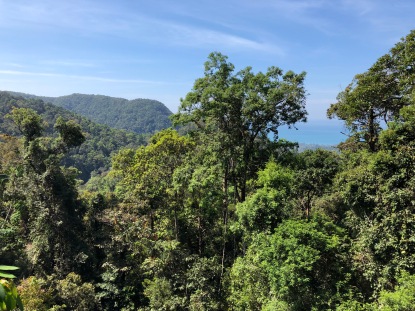 Apart from that, I had a lovely time on the island. I managed to lie still for about two days, soaked up the sunshine and met some lovely people. I didn’t quite manage to even out my tan lines.

And yes! I am still in touch with Andrew. He will be in France in August to go to a friend’s wedding, we agreed that if neither of our situations changes by then I will be his +1. Big smile. He went on another tour again today, I am a little jealous about it. I’d love to see both again, the country and of course him. Gosh, his kisses were quite something. Gives me butterflies just thinking about it.

I have also exchanged emails with a few people from my NZ group. And am still in touch with Nia, the other single lady in the group, who I will definitely meet again when I am back at home. I found another soulsister.

Now I am in the car again on my way back to Bangkok. Originally I had planned to drop my luggage at the airport and then go back into the city for some sightseeing. However, I decided against it, booked a room at a hotel with a spa and pool – I will enjoy the sunshine before heading back to cold and rainy London.

I can’t quite believe how long I have been away. And I am not sure if I am ready to face reality. But here goes.

My honey didn’t make it. 😦 I am absolutely gutted and annoyed with myself that I packed it into my hand luggage and not the check-in suitcase. I nearly cried when I discovered it wasn’t there. END_OF_DOCUMENT_TOKEN_TO_BE_REPLACED

I feel like I need to write a little round-up note for this New Zealand experience. I kept saying how amazing those views were, how fantastic the scenery looked, how wonderful the people were. END_OF_DOCUMENT_TOKEN_TO_BE_REPLACED

Christmas Day. We went to bed with views on Mount Cook and got up the next morning with the amazing sight of this iconic mountain. The weather gods really meant well for us (the righteous and all of that 😉 ). END_OF_DOCUMENT_TOKEN_TO_BE_REPLACED

To be found in the Mackenzie Region, Mount Cook is the most iconic mountain in New Zealand, with 3,724 metres the tallest in the country and surrounded by 30 equally fantastic mountains, all above 3,000 metres. END_OF_DOCUMENT_TOKEN_TO_BE_REPLACED

Queenstown, the city for adrenalin junkies and crazy folks in the Otago region. Every activity with a bit of a kick can be found and booked here. Of course, the most famous being bungie jumping, but not to forget kayaking, rafting, jet boating, river boarding, and many more. END_OF_DOCUMENT_TOKEN_TO_BE_REPLACED

Milford Sound is said to be a scenic utopia and New Zealand at its glorious and unparalleled best. And oh my goodness – another one, brace yourself! – it did not disappoint. What a breathtaking place!! END_OF_DOCUMENT_TOKEN_TO_BE_REPLACED

Our itinerary is packed so full, I won’t list everything we did in the past couple of days. Unfortunately, WiFi is also not available everywhere, and if so only a limited amount of data which makes updating the blog difficult.

So where did I go? END_OF_DOCUMENT_TOKEN_TO_BE_REPLACED

Well, travel details first: We crossed over to the South Island by Islander ferry It was a perfect crossing, calm waters, fantastic views, stunning first sight of the South Island. END_OF_DOCUMENT_TOKEN_TO_BE_REPLACED